Wilder and hallucinogenic magic mushrooms are taking over as one of the most popular psychotropic drugs that have been making waves everywhere. While it’s rooted in nature and has been used to heal for many the same way marijuana has been making breakthroughs in the healthcare industry, magic mushrooms are still considered a Schedule I substance under the Controlled Substance Act.

The lack of regulation and medical supervision makes magic mushrooms hard to control, leaving them a temptation for abuse. Despite the drug being a gateway for addiction, its potential in the medical setting encourages markets to release easy-to-digest versions like mushroom chocolate.

Mushroom chocolates bars are sure to be a thrilling delight to the senses, but is the mushroom chocolate a do-up for progressive healthcare or more of a dangerous delicacy for consumers? Before we can indulge in the bittersweet facts about mushroom-laced confectionery, it’s better to take a bite out of its origins and understand what makes magic mushrooms a formidable, mind-altering drug.

What are Mushroom Chocolate Bars?

Magic mushrooms can be eaten or brewed as tea, but users share the same sentiment that they taste like dirt in either method. The unpleasant flavor profile prompted people to create a more palatable alternative to consuming magic mushrooms; that’s why underground delicacies like mushroom chocolates are booming in popularity.

Mushroom chocolates are just like any candy bar, but the difference is it contains mushrooms and all their psychotropic contents. While mushroom chocolates leave a sweet note at first bite, they can quickly lead to sensory overload.

How Strong are These Mushroom Chocolate Bars?

Magic mushrooms are best ingested as it delivers a stronger trip, but shrooms chocolate bar make it easier to enjoy every bite as it gets rid of the poor, earthy taste. After eating shrooms chocolate bar, the psilocybin turns into psilocin as the body processes it, causing one’s perception to alter in more ways than one. The euphoric and mind-numbing trip can start to take effect between 20 to 40 minutes after ingestion, while the entire high can stretch up to six hours long.

Microdosing Mushroom Chocolates: What is Microdosing and What Does it Do?

Many fans of magic mushrooms suggest that the best way to enjoy the mind-altering effects without going overboard with its psychedelic tendencies is to microdose, which means to take smaller amounts of the drug. It is done to reap the medicinal benefits of drugs like cannabis, LSD, and in this case, mushrooms, all of which can produce relaxing and creative-inducing effects when taken in microdoses.

Clinical studies and further research also found that microdosing can provide emotional, physical, and cognitive benefits as it encourages users to embrace a more positive outlook in life. While it doesn’t aim to blow the mind, it does bring you greater peace and spiritual insights.

While microdosing magic mushrooms—mushroom chocolate, or any other form—show significant potential in psychiatric settings thanks to their ability to rewire the mind, it lacks clinical and scientific research to prove the claims. Nonetheless, the healthcare sector recognizes microdoses of magic mushrooms as the first step to helping patients find clarity in their recovery for various mental and mood conditions.

What are Magic Mushrooms? 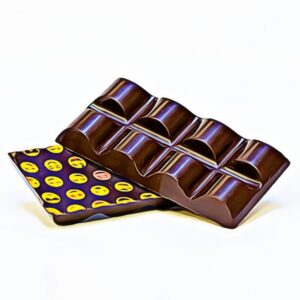 Also known as shrooms, mushies, philosopher’s stones, golden tops, liberty caps, blue meanies, and more, magic mushrooms are cultivated from the wild. The high-life effects that take place when consuming magic mushrooms happen thanks to psilocybin, a naturally-occurring psychoactive compound that can cause hallucinations.

Psilocybin was first discovered and isolated by a Swiss chemist known as Dr. Albert Hofmann in 1958, wherein he found the compound to deliver mind-blowing and mood-altering effects. Consequently, the Swiss chemist was also the first to discover lysergic acid diethylamide (LCD), which has the same psychotropic effects as magic mushrooms.

LSD is made from the fungus found on grains, and while they’re essentially different in many ways, both produce the following effects:

Psilocybin is one of the most popular forms of hallucinogenic, and while it has health-boosting potential, it is still classified as a Schedule I drug thanks to its intense effects and unregulated usage. With that in mind, magic mushrooms have a high risk of misuse and leave mushroom eaters vulnerable to its powerful, mind-altering effects.

What are the Side Effects

As users would say, magic mushrooms are one of the strongest psychedelic drugs that can transport the mind to what feels like a higher dimension. Its contents like psilocybin are powerful enough to create hallucinations akin to poisoning—one that delivers the high in a fever dream of hyper visuals and explosive colors. As for the specific effects, the high on magic mushrooms can cause the following:

Many factors can influence the intensity of the magic mushroom’s effects, such as the dosage, age, weight, emotional and mental state, and environment. While magic mushrooms are rising in psychiatry as an experimental drug that aims to reveal and heal mental woes, higher doses can often induce anxiety, paranoia, and confusion more frequently than not. With that in mind, the same effects mentioned above are to be expected when you indulge in shrooms chocolate bars. 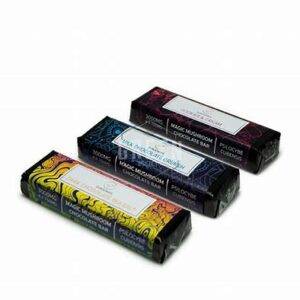 Mushroom chocolates may seem sweet and harmless, but they can deliver a strong, psychotropic high that can leave users with a distorted sense of reality. Microdosing magic mushrooms play a pivotal role in helping patients deal with pain management and mental disorders, but keep in mind that the science behind its medical potential isn’t quite as solid yet.

Magic mushrooms can still lead people to addiction and cause unwanted changes to one’s behavior; that’s why it’s important to understand what the psychedelic drug can do before experimenting with this booming hallucinogen. Tasty alternatives like mushroom chocolates make the drug more appealing and accessible, but remember that the trippy vibes can still pose a threat to your health when left unchecked.

There are no reviews yet.

Be the first to review “mushroom candy bars” Cancel reply